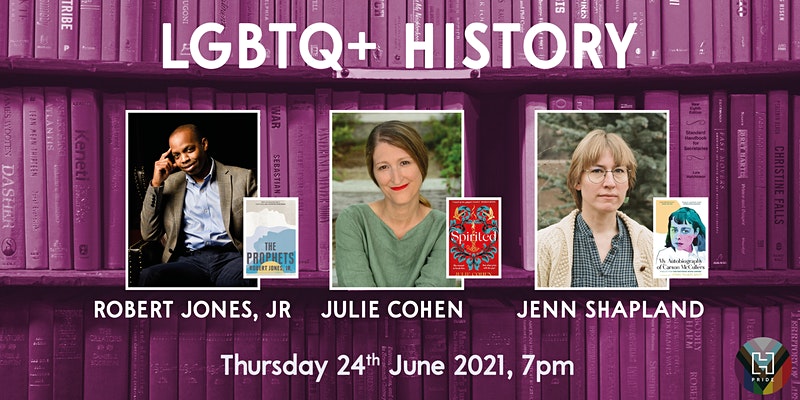 Queer history has not always been told or recorded, and in some cases, it has been hidden from us entirely. Today, queer authors uncover the hidden truths from our history and bring these important stories to light. Robert Jones, Jr., author of The Prophets, Julie Cohen, author of Spirited and The Two Lives of Louis and Louise, and Jenn Shapland, author of My Autobiography of Carson McCullers, will discuss these issues and the role that books play in writing and re-writing the past.

Robert Jones, Jr is a writer from New York City. He received his B.F.A. in creative writing, and M.F.A. in fiction from Brooklyn College. He has written for numerous publications, including The New York Times, Essence, and The Paris Review. He is the creator and curator of the social-justice, social-media community Son of Baldwin, which has over 275,000 members across platforms. The Prophets is his debut novel.

Julie Cohen grew up in the western mountains of Maine. Her house was just up the hill from the library and she spent many hours walking back and forth, her nose in a book. She studied English Literature at Brown University and Cambridge University and is a popular speaker and teacher of creative writing, including classes for the Guardian and Literature Wales. Her books have been translated into fifteen languages and have sold over a million copies; DEAR THING and TOGETHER were Richard and Judy Book Club picks. Her most recent novel is the critically acclaimed The Two Lives of Louis and Louise. Julie lives in Berkshire with her son and a terrier of dubious origin. You can find Julie on Twitter: @julie_cohen or you can visit her website: www.julie-cohen.com.

Jenn Shapland is a writer and archivist living in New Mexico. Her first book, My Autobiography of Carson McCullers, was a finalist for the National Book Award and the Lambda Literary award. Her essays have won a Pushcart Prize, a Rabkin Foundation Award for art journalism, and a Howard Foundation Fellowship. She has a PhD in English from the University of Texas at Austin and is currently writing a collection of essays called Thin Skin.