Women at the Forefront: Finding the nerve to lead

What does it take to answer the call to lead? And why are some women reluctant to answer the call? Find out from two of Canada’s most accomplished leaders, Drs. Martha Piper and Indira Samarasekera, as they share their candid, smart and insightful accounts that shaped their illustrious careers.

Vastly different career paths led them to become the first female presidents of two of Canada’s top universities and directors of some of the nation’s largest companies — what they had in common was their gender and their willingness to dig deep, take risks and a second-to-none work ethic.

On October 14, join this insightful conversation co-facilitated by UBC Okanagan Principal and Deputy Vice-Chancellor Lesley Cormack, and recent Bachelor of Arts graduate Prapti Mallhi that is sure to inspire current and future women leaders. 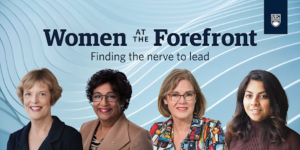